Those were the words with which Stephen Colbert readied his audience at the start of his first show on DIRECTV in 2005.

Comedy Central‘s fake-news TV pundit claimed that, like his hero George Bush, it’s better to “know with your heart” than to “think with your head.” Colbert promised to deliver “truthiness.” He won’t just read the news to you, but “feel the news at you.” 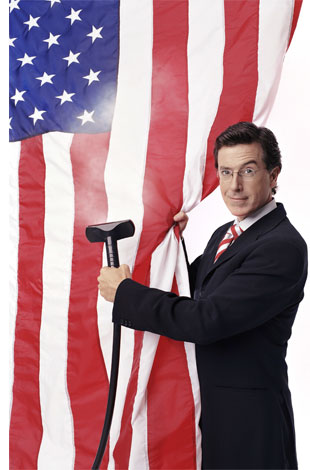 Starting on Jon Stewart's The Daily Show, Colbert’s former boss gave him ample opportunity to develop his political comedy chops in his role as correspondent. The Colbert Report format is fashioned after flag-waving news pundits like Bill O'Reilly and Sean Hannity, whose self-important puffery makes for fertile comic satire.

Colbert’s character is an over-the-top caricature of punditry that plays loose with the facts and constantly promotes both himself and the multitude of products he endorses. It’s a character he rarely steps out of and manages occasionally to insert into real news stories. In the 2008 presidential election he talked about getting on the ballot in his home state of South Carolina before balking at the US$35,000 fee.. More recently, he testified in character before Congress on immigration, and held a mock rally in Washington, DC. His current project is the Making a Better Tomorrow, Tomorrow super-PAC that pokes fun the American campaign finance system by taking part in it.

Colbert also has a talent for getting things named after him. His segment, "Who's Not Honoring Me Now," highlights those who have the audacity to ignore his greatness, though many succumb to his super-inflated egoism by naming a variety of things after him:

The show has won both popular and critical success with its mix of interviews and recurring comedy segments. Since its launch, the series has won 18 Emmy nominations and a Peabody Award for Excellence in Broadcasting. His writing cohort won 2 Emmys for Outstanding Writing for a Variety, Music, or Comedy Program. Perhaps most telling of Colbert's impact on the social consciousness, though, is that "truthiness" was proclaimed the 2005 Word of the Year by the American Dialect Society and the 2006 Word of the Year by Merriam Webster.

Related posts:
The Flying House From The Movie Up Built In Real Life
Airplane Safety Card Humor
The Return of the Soup Nazi

Previous
The App-Controled Rover Spy Tank
Next
Infographic: Lifespan of a TV Show
You might also like
One of the following