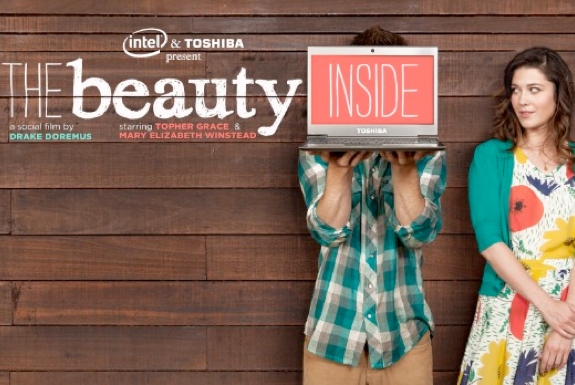 What if everyday when you woke up you had the appearance of a completely different person on the outside? That’s the basic—and very cool, we think—premise of The Beauty Inside.

The movie tells the story of Alex, who maintains the memories and mentality of a 20-something male as he goes through a daily metamorphosis of his appearance. He’ll look like an Asian grandmother one day, a middle-aged balding man the next and so on. Throughout it all, Alex has to keep a job, maintain his friendships and perhaps, per chance, find love.

If you think you’ve seen shades of this storyline before (for instance, in the TV series Quantum Leap) you might be right. But movie has three other unusual features that, when combined, no other movie has attempted before:

First, the movie will be released online in weekly installments. The first episode is scheduled to air August 16th on The Beauty Inside‘s Facebook page (where fans can also interact with Alex).

Second, The Beauty Inside goes beyond mere product placement. The whole movie is sponsored by a single product: the Toshiba Portege Ultrabook. (Toshiba, along with their ultrabook partner Intel, also sponsored the Spot Cool Stuff post you currently are reading). And if you were wondering what the tie-in is with the movie, Alex uses a Portege to keep his daily journal.

Finally—and perhaps coolest of all—the fact that the The Beauty Inside‘s main character changes appearance every day creates an unusual opportunity to have multiple actors (and actresses) play the part of Alex. The movie producers have opened auditions for the lead to the public (get the schedule here). As many as 30 novice actors will play Alex and star opposite the reoccurring characters played by Topher Grace (That ‘70s Show, Spider-Man 3) and Mary Elizabeth Winstead (Abraham Lincoln: Vampire Hunter, Scott Pilgrim vs. The World). Directing will be Sundance award winner Drake Doremus (Like Crazy)

See the video below for a preview: