Most American adults who are of a certain age today remember playing Twister when they were children. Spot Cool Stuff isn’t sure how international Twister is†, nor how common it is for kids these day to play. But if Twister were ever to exceed its past popularity it might be in the form of this huge Twister board.

Officially called the Inflatable Outdoor Color Dot Game, presumably to avoid copyright claim from Hasbro Games, this bouncy 15 foot by 15 foot (4.5m by 4.5m) playing area can accommodate up to 10 twisting participants. That would make for 40 hands and feet stretching, clawing their way onto one of 64 colored dots. Sounds rather chaotic. And lots of fun.

At a cool US$2,000, the Inflatable Outdoor Color Dot Game is probably the world’s most expensive consumer Twister game. But at least it comes with a 3-foot high spinner and an electric air blower to inflate the reinforced plastic playing area. Altogether, it’d make for quite the birthday party activity.

Or, some other kind of activity.

The original Twister, which came out in 1966, was the first game to use the human body has a playing piece. As such, some critics derided it as selling “sex in a box.” We don’t want to know what those critics would imagine the Inflatable Outdoor Color Dot Game would be used for. (Well, we kind of do but not while stuck at the office).

If you like blowing things (← awkward transition) check out our review of these two cool inflatable pool toys.

† Spot Cool Stuff once taught Twister to some grade school children in Japan. They had never heard of it 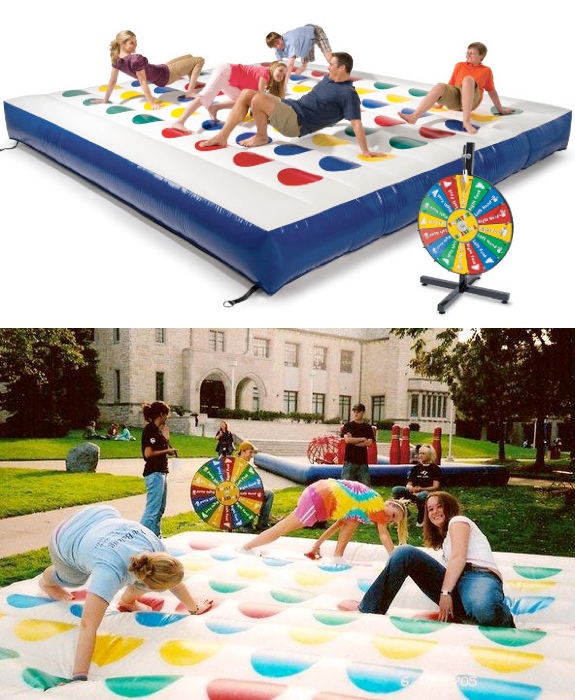 Previous
The Hotel that was
Luke Skywalker’s Home
Next
Father, Son Launch Toy Train Into Outter Space
You might also like
One of the following