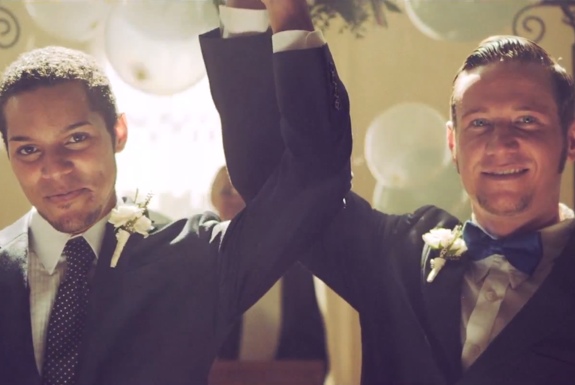 If a rapper spits pro-gay marriage lyrics on the Internet, and the Baby Boomer generation doesn’t own an iPad, is it still a socially progressive? You bet your ass it is.

Macklemore and Ryan Lewis recently released “Same Love,” a pro marriage equality hip-hop anthem. Yes, the rap kind of hip-hop. The hip-hop of Snoop & Dr. Dre, a genre long dominated by a hyper-masculine perception of what it means to be a man.

This song points to the hypocrisy imbedded in the land of the free limiting the rights of a select minority of its citizenry. Macklemore calls out the very real negative consequences of using the word “gay” as a negative descriptor. He speaks up for all of the middle and high school kids suffering inside the isolation created by a society whose off-handed colloquial language makes their hallways forever a dangerous place. He raps about the razorblades of loneliness and ostracism that are cutting through our beautiful gay children’s wrists, instead of the stubble of their beards.

Macklemore is not a transcendent rapper. He misses beats and finagles syllables in the herky-jerky style of a beginner poet attempting to make every third line rhyme. While he may have thrift store racks full of personal style, his flow still has a ways to go. But nonetheless, when Mary Lambert’s voice rises to meet the refrain, you hear the honesty and pain inherent to the words, “I can’t change. Even if I tried. Even if I wanted to.” You can feel the dual-motivations to be accepted by one’s peers and to love who you are, pulling gay youths in opposite directions. Have friends and fake it, or be yourself by yourself.

She has found love. She has toiled on hands and knees, sifting through the rocks, sand, and mud in the dating pool. Mercifully, one imperfect nugget of gold panned out. She can’t believe it is all her own. And yes, her nugget has a gender and a name and an identity. Most importantly, however, is that in this found love there is safety. There is relaxation. There is acceptance. In the arms of her lover the memories of those school hallways seems less constricting, the wounds less permanent.

Macklemore and Ryan Lewis are probably more pop/hip-hop artists than they are gay icons. More Vanilla Ice than Dan Savage. But in a world where everyone’s personal opinions, no matter how decrepit, are easily broadcast worldwide with a click of the word ‘Submit’ on a YouTube channel, this sure does seem “like a damn good place to start.”

Previous
The Royal Wes Anderson: King of Quirk
Next
A Parental Guide To Surviving a Teen Pop Concert
Entertainment Categories

Previous
The Royal Wes Anderson: King of Quirk
Next
A Parental Guide To Surviving a Teen Pop Concert
You might also like
One of the following