The Maze of Games:
An Interactive Puzzle Novel

In fact, we only one we know of one such tome: The Maze of Games. And that book isn’t even published yet. It’s a concept project that’s currently open to investors at the crowdfunding website Kickstarter. And what a cool concept it is. 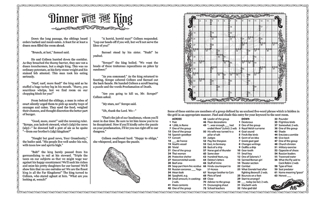 On any given page of the book you are likely to find either a portion of the story or a puzzle. The prose tells the tale of two teens in Victorian England who accidentally summon a magical creature. The puzzles — word games, logic puzzles and other kinds of mindbenders — contain the answer to a larger mystery hidden within the book. (Click on the example page to the right to see it full-sized in a new window.)

As if that weren’t puzzley enough, there’s a catch: The pages aren’t in order! How you flip through depends on the path you take through each of the book’s four mazes.

Fortunately, find your way the video, below, doesn’t involve solving a riddle. Watch it to learn more about The Maze of Games

8 Giant Mazes Worth Traveling For
Fashionary: More Than a Fashion Sketchbook
Games to Inspire Young Travelers

The Oddest Book Titles Of 2013