Harry Potter is finally bringing his magic to the world of eBook readers.

The publishing empire that is JK Rowling has reached a distribution deal that will allow you to carry all 4,176 pages of the Harry Potter series around in your coat pocket—provided that your coat pocket is holding an Amazon Kindle, Barnes & Noble Nook or one of the handful of other compatible device like the Sony Reader. 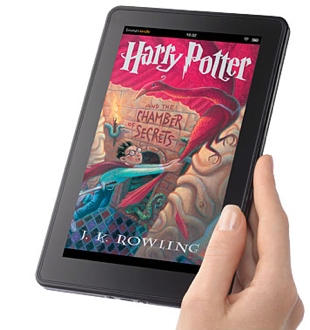 This literary deal has been in the works, literally, for years. It is to eBook readers what the Beatles coming to iTunes was to the iPod. As part of the accord, both Amazon and Barnes & Noble agreed to take less than their usual 30% commission on sales. They also had to allow the purchase transaction to take place on JK Rowling’s own website, Pottermore, and give her final say over pricing.

Fortunately (and somewhat surprisingly), the pricing agreement worked in the consumer’s favor. The first three books in the Harry Potter series each cost US$7.99 in eBook form; the last four installments each cost $9.99. That’s a bit less than the dead tree paperback version and a big discount over the hardback.

Amazon Kindle users will have to make their way to Pottermore to download their Harry Potter eBooks via the Amazon website. Amazon is extending their “buy once, read everywhere” promise to the Harry Potter eBooks, so once downloaded Kindle users will also be about to read about You-Know-Who on their iPad, iPhone, Android device and computer—all without paying any extra Galleons. The books will also be £4.99 on the UK version of the Kindle. Coming soon, foreign language versions in German, French and Spanish.

Barnes & Noble Nook users users will, likewise, have to make their way to Pottermore via the BN website. But those with a Nook have an advantage Kindle users don’t—they can go into any Barnes & Noble store and read the Harry Potter eBooks for free.

And where should you read your newly electronified Harry Potter books once you have them? We suggest Harry Potter World. 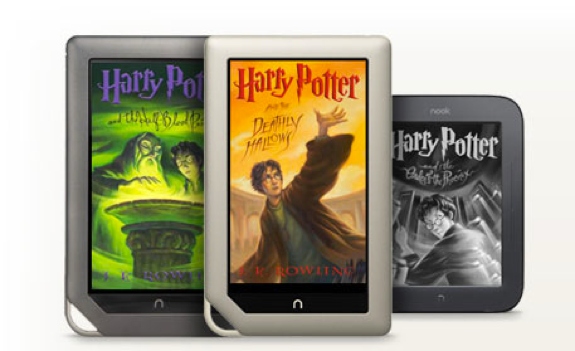 Previous
3 Modern, Interactive Board Games
Next
Sponsored Video: Range Anxiety
You might also like
One of the following