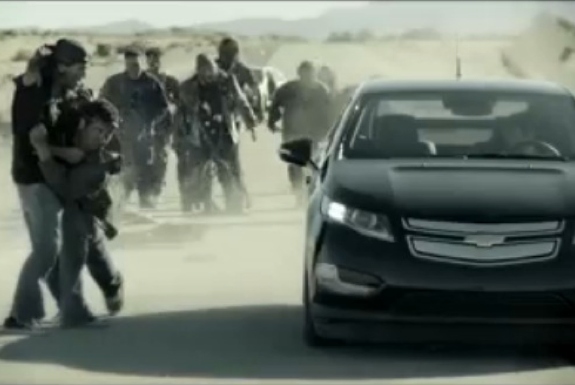 How far can you travel in a Chevrolet Volt without refueling? Far enough to escape a pack of zombies.

That’s the premise behind a cool new video advertisement for the Volt electric car.

Of course, the video is making certain assumptions: that your ghoul getaway won’t require armor plating . . . that the beautiful driver of said getaway would stop for two scruffy survivors . . . that once ensconced in the safety of a Volt one can overcome the Armageddon by happily driving off into the sunset.

The ad also assumes that the zombie apocalypse won’t extend more than 345 miles (550km) in any direction, that being the range of a Chevrolet Volt. Most regular gasoline vehicles can go at least that far; diesel cars can go much further. But among electric vehicle owners, there is a certain “range anxiety” that comes from driving a vehicle that can travel only a relatively short distance without recharging.

The advantage of a Chevy Volt is that it’s an E-REV—electric vehicle with extended-range capability. Running purely on batteries, the Volt has a range of 25 to 50 miles (40 to 80km). Once the batteries are depleted, a gas engine kicks in to create more electricity. In this way, an E-REV is different from a hybrid. On a hybrid automobile, the vehicle is directly powered by a gas engine. In fact, hybrids require a combustion engine to accelerate quickly and to run at highway speeds. On the Volt, the gas engine is a secondary power source used only to generate electricity.

Being an E-REV, the Volt also has a higher top speed than most other electric cars. Among electric vehicles that are widely available to consumers, only the super-expensive Tesla Roadster will speed you away from the undead faster.

The Chevrolet Volt zombie ad came about as a result of a contest run by MOFILM, a company that inspires film-makers to create videos for big brands and social causes. Check out some of the other contest submissions at the end of the video, below.

Previous
Kindle-Toting Muggles Rejoice
Next
The (Not For Parents!) Travel Book
Entertainment Categories

Previous
Kindle-Toting Muggles Rejoice
Next
The (Not For Parents!) Travel Book
You might also like
One of the following

Woman Takes Photo Of Herself Every Day For 4.5 Years