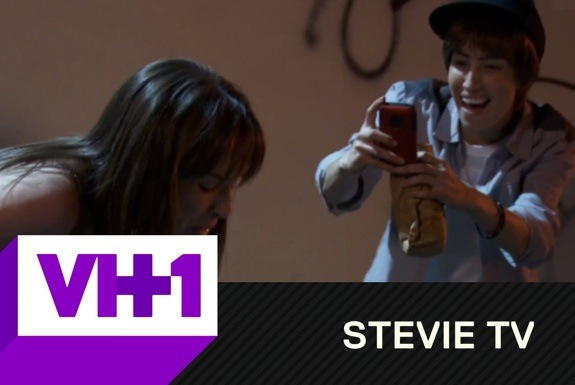 Justin Bieber has become a caricature of himself. Whether it be the entourage he rolls with to host SNL, or joyriding his Ferrari so douchetastically as to be followed home by former NFL bad boy Keyshawn Johnson for a lecture on the finer points of gated-community driving behavior. Bieber’s exploits have become so incredibly bizarre that it feels as if he hired a team of writers to put out farcical press releases while indulging in some sort of hallucinogenic drug binge.

How else does one explain headlines such as:

And so, it was only a matter of time until someone caricatured the caricature as well as VH1’s Stevie TV and its actual team of writers did:

Stevie TV drives a nail through the heart of the disease which is ‘Bieber fever’ with this hilarious faux “Win a Dream Date with Justin Bieber” comedy sketch. It all starts with casting the scrawny Bieber as a young woman. Not only does this choice reinforce Bieber’s prepubescent ‘look,’ which has morphed from transitioning lesbian all the way to Kate Moss heroin chic, but it also lulls us into a false sense of G-rated sensibility which is then summarily shattered with the first smack of the unsuspecting under-aged Belieber’s ass. And, with a female Biebs, it’s a lot easier and more satisfying to laugh at the horrible garbage that comes out of his mouth. Bieber’s game with the ladies is one part Beavis & Butthead’s love of obvious sexual innuendo, one part Michael Scott’s self-adoration, and one part Paris Hilton’s selfie twitpics. You could love him, if only he weren’t already so damn in love with himself.

Bieber’s portrayal perfectly captures his complete lack of adult sex appeal and his utter disconnection from reality due to having his life filtered through handlers since before he outgrew middle school talent shows. He’s never learned to be sympathetic to the girl blowing chunks at his side, but rather his reality is captured through the lens of a high mega-pixel cell phone camera. It has become obvious that Bieber’s Facebook reality has left velvet ropes around those areas of his brain that foster human connection.

Which brings us to the bathroom scene, a decidedly darker vision of the world of a child superstar. Frankly, it’s probably prophetic. The last musician to get this famous, this quickly, while having the talent to back it up, might have been Michael Jackson. And as VH1’s fake Bieber hands his spare Glock to the adoring Belieber to hold while watching him take a dump (“I like to have someone watch me.”), you get that uneasy feeling that the real Biebs may not be as far from a bathroom floor reality of his own. There may come a day when even the Biebs is forced to trade in his BMW lifestyle for a more responsible Korean import like a KIA.

And you know what KIA stands for, right? Ketamine. Involuntary manslaughter. Alimony.

A Matter of Taste
FX’s Ball-Busting Comedy: Archer
5 Most Unintentionally Offensive Movies of All Time

Previous
A Matter of Taste
Next
The Royal Wes Anderson: King of Quirk
Leave a Reply Cancel Reply

Previous
A Matter of Taste
Next
The Royal Wes Anderson: King of Quirk
You might also like
One of the following